Before the world completely changed last week (#flattenthecurve), I had decided to challenge myself to find interesting salads. I don’t LOVE salads. I don’t know many people that do, but that’s besides the point. Salads can be a real drag and I wanted them not to be. Anyway, the world’s all weird and instead of cooking from an assortment of tins, like the rest of my town seems to be, I decided to continue using my fridge full of produce while I socially distance myself. After all, if there’s anything I can do well, it’s socially distance myself.

Anyway, this first salad was another Chrissy Teigen hit! As an aside, I really dislike that autocorrect tries to change her name to Chrissy Tiger every. single. time. This butternut squash salad has some bite and the seasoning for the squash makes it great without the salady greens and cheese.

To make this, preheat your oven to 400F. You’ll need about 4 cups of chopped butternut squash (peeled and chopped into 1/2 inch cubes). Toss your squash cubes with a tablespoon of olive oil and season it with kosher salt, pepper and 1/4 to 1/2 tsp of cayenne pepper. I go with 1/2tsp, but I think I nearly killed my husband with the spice, so you do you!

In the meantime, in a nice big bowl, combine 5 cups of baby arugula, half of a small red onion diced or thinly sliced, a half a cup of pomegranate seeds, 1/4 cup of toasted pepitas, 1/2 cup of crumbled goat cheese and some pepper.

Struggling to get your pomegranate seeds out? I watched a bunch of videos on how to do this effectively and I think I’ve found a solid method. Slice into your pomegranate along its equator, for lack of a better description. Don’t cut too far in though. Twist your two halves away from each other to separate them. Take one half and squeeze it gently while tapping the outside with a wooden spoon. It’s an effective method, but it will still make a mess, so don’t wear white for this one.

When your squash has cooled, add it to your salad greens, etc. To make the dressing combine 2tbsp of white wine vinegar, 1 tbsp of dijon mustard, 1 tbsp honey, 1/2 tsp of minced garlic, 3 tbsp of olive oil and some salt and pepper.

Have you bought Chrissy’s cookbooks yet? COME ON!!

Ok, there’s a baby crying. Gotta jet! Very low on the hassle scale though, friends!  Stay healthy and inside your houses. When this salad series is done, I’ll be “Cooking During Corona” and the meals will become increasingly terrible as I make what I can find in my freezer.

When we get through this, and if you can now, consider donating some of those canned goods some of you have amassed to your local food banks. We’re all in this together. 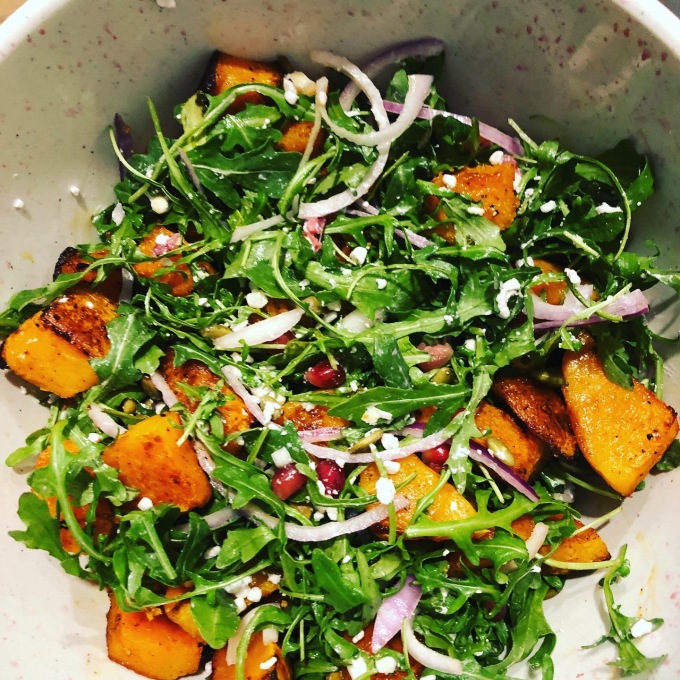