You may have noticed that we eat A LOT of grains in this house. In particular, we eat a ton of pasta. I’ve tried an enormous number of pasta recipes, but after I made THIS last week, Kyle declared it his favourite pasta dish. That’s no small feat. He’s a really tough critic. I hope I’m conveying how well this dish went over at my house. It was reasonably easy to make too!

Start by cooking three or four slices of bacon in a frying pan over medium heat. Once done to your liking, set aside on some paper towel. Keep your bacon fat in your pan, as you’ll be using it shortly.

Then, in a medium sized pot, bring salted water to boil. Once boiling, add 1/2cup of frozen peas. Cook them for about 5 minutes. Using a slotted spoon, remove the peas from the water and set aside. Add about 300g of spaghetti to the boiling water and cook according to the package. NOTE: The recipe calls for 1lb of spaghetti. This is EXCESSIVE to say the very least. Keep the rest of the ingredients as described in the original recipe.

While your pasta is cooking, go back to your bacon fat filled frying pan. Heat it back up and add your cooked peas and 1 cup of asparagus, cut diagonally into 1 inch pieces. Sauté your greens for about 5 minutes. Take the pan off the heat and add approximately 10 basil leaves, thinly sliced. Set your pan aside.

In a separate bowl, whisk together 5 eggs and two tbsp of milk.

Drain your pasta when it’s ready, but reserve some cooking water for when you combine your various elements. Temper your egg mixture with just a little cooking water. Be careful with the eggs. You don’t want them to scramble with your pasta.

In a heated serving bowl, combine your pasta with the veggies and eggs and toss to coat. Season it with salt and pepper to taste.

Grate a little parmesan over each portion when you’re ready to serve.

It was really easy. Really REALLY easy. I’d give this one a 1 out 10 on the hassle scale. Try it! 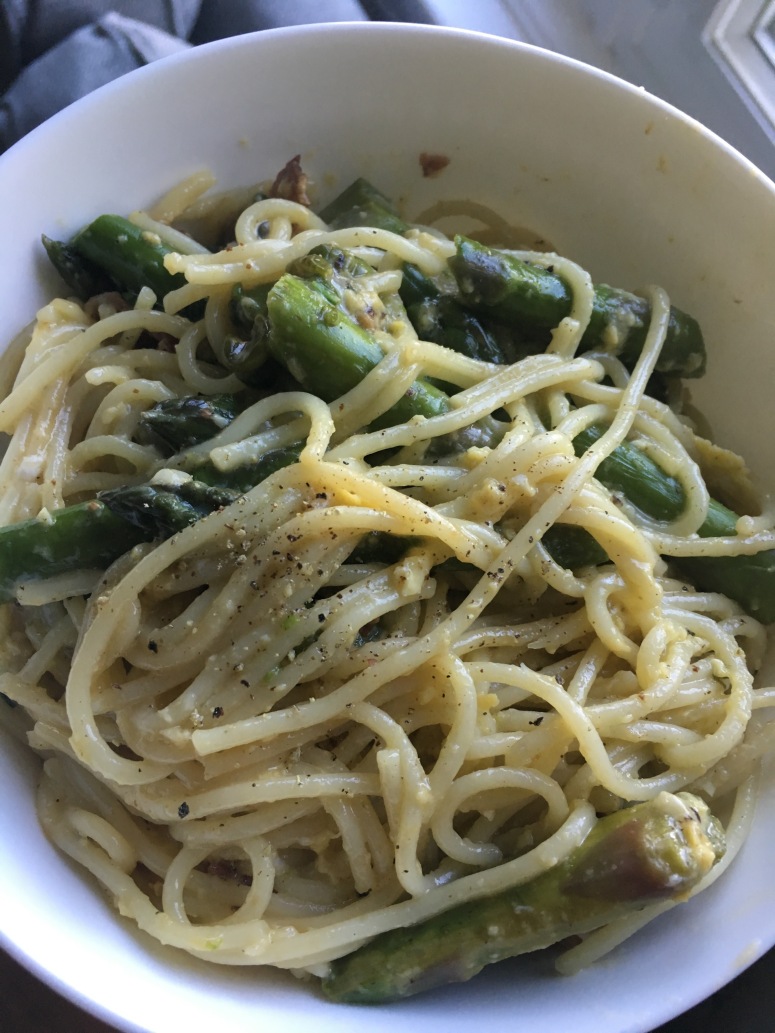