I try to eat healthy. Some weeks are better than others. It depends on what shift I’m working, the temperature, how well I sleep and a plethora of other factors. It may sound a little hippie-dippy, but I try to listen to what my body says it needs. Not in every respect, but to a degree. It’s the dead of winter, my body absolutely 10000% does not want to eat a salad. It wants filling, warm food. I tend to eat more soups and comforting meals in the colder months. I think that’s the same for most people. In the summer, I try to eat as much fresh produce as I can get my hands on.

I made no resolutions this year, so please don’t confuse this with a New Year, New You! post. After a long week of working and feeling run-down, I wanted to make an effort to eat healthier on my days off. Buddha bowls have been all the rage for a while. I’ve often looked at recipes and promised to try one eventually, but was concerned that the concoction might turn out tasteless and uninspiring.

I made THIS Buddha bowl for dinner a couple of days ago. I’ll start by saying that I really liked the basics of this recipe, however, I did not enjoy the tahini sauce and would omit that in the future. It’s the tahini for me. It is never smooth enough and the taste just takes over the entire dish. So, I mean, try it…if sesame is your jam. I think it requires a more maple type taste. Also, I used fairly big sweet potatoes, and they required a little bit more time than suggested in the recipe. I would give them an additional ten minutes in the oven by themselves before adding the onions.

So, get to it! Set your oven to 400F. Halve your two sweet potatoes and coat the cut side with a little olive oil. Cook them for ten minutes, take them out and add your 1/2 red onion, cut in wedges, to your baking sheet and toss the onion with a little oil. Back in the oven they both go for ten minutes. In the mean time, cut the thick stems off your broccolini and tear your kale into manageable bites. Wash both greens. After the ten minutes, add your broccolini to the baking sheet with a little more oil and season with salt and pepper and turn over your sweet potatoes. Back in the oven for about 8 minutes they all go. After your kale has been washed, add a little olive oil and salt to it and massage it to break it down a bit. When the timer sounds on your oven, add your kale and cook for about 6 minutes. It’s more than recommended by the recipe’s author, but I like my kale crispy. Make sure your sweet potatoes are reasonably soft before you take them out.

I’m not even going to bother telling you how to make the dressing because as I said, it doesn’t really do anything for the meal. Except let the sesame flavour take over. When I come up with a decent substitute, I’ll let you know.

Serve it in bowls (obviously) and pile your chickpeas on top of your roasted veggies. The sweet potato skins came away while I was cutting the potatoes into smaller pieces, so that was a bonus. 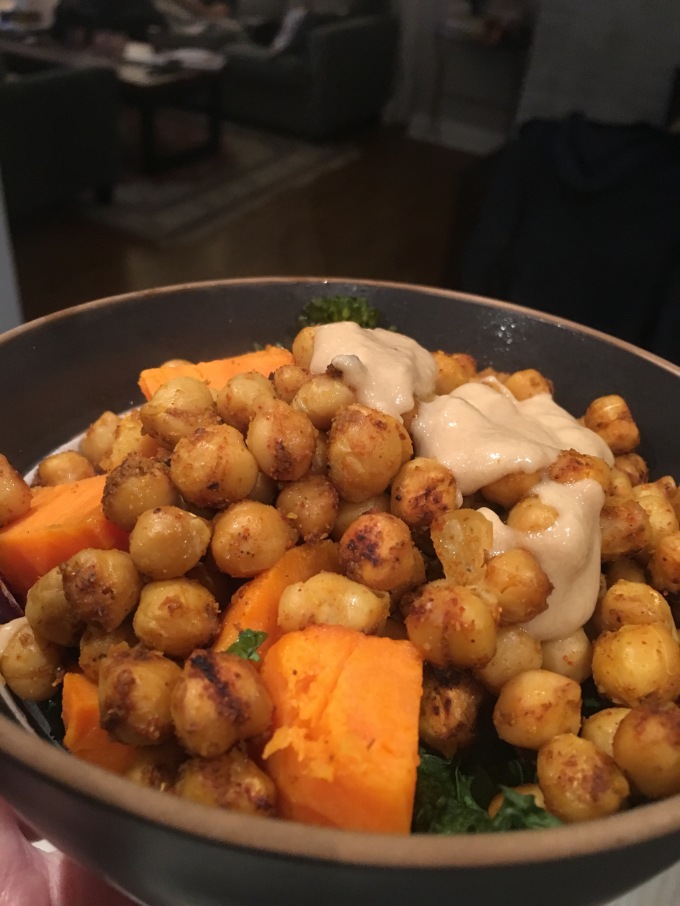 It’s good, really. Kyle even said it was a make-again and he’s a pretty tough critic. Hassle level was pretty low. I’d say maybe 1 out of 10. You really have to move quick while it’s cooking. It could also be that I was making guacamole at the same time, but I seemed to be running, A LOT.