I’ll admit this isn’t the first time I’ve made this recipe, but I just keep coming back to it because it is so nice. I’m a recent duck convert. More specifically I’m a duck confit convert. I don’t know if I hadn’t noticed the availability of duck or if it has really just become popular in the last couple of years, but duck confit seems to be everywhere these days.

This recipe is from the LCBO (Liquor Control Board of Ontario for anyone not from the area). Yes, the government still controls the sale of alcohol in our province, but they have a shiny and pretty magazine that comes out every couple of months with some great food and drink recipes. The magazine’s website can be found HERE and the recipe I used can be found HERE.

I had been buying confit duck at the St. Lawrence Market until recently, when I discovered that Costco was carrying it! Not the same kind of shopping experience, but definitely more accessible. So the recipe is actually pretty straight forward. It requires a decent amount of attention. This is not a recipe that you can throw together, pop in the oven and forget about it until the timer goes off.

To begin, pop your bag of baby potatoes (750g worth) into a pot of salted, boiling water. Keep them in there until they’re tender and then remove and set aside. Then, over to the duck.

In a large frying pan and over medium-low heat, place your two duck legs skin side up. Cook them until the meat has warmed through, turning occasionally. Once it has warmed through, pull the meat away. Try for the biggest pieces possible. Remove the skin and cook it for a further ten or so minutes, until it’s nice and crispy. Remove the skin from the pan, chop it up and set it aside.

Add a knob of butter to the pan, and once sizzling, toss in your parboiled potatoes. Season with salt and keep ’em cooking until they’re nice and brown. Then set aside again. (These poor potatoes don’t know if they’re coming or going!)

Then, throw your chopped asparagus (1lb of the stuff, chopped into 1-1/2 inch lengths) in the pan to sauté for a few minutes. Until it’s nicely softened. Add your sugar snap peas (175g), garlic (1tbsp) and thyme (1tsp) and continue to sauté until the veg is nicely tender-crisp. Toss your potatoes and duck meat into the pan and let all the ingredients warm.

At this time, I start up another frying pan and fry up to eggs (over easy) to place on each serving of the meal. The recipe calls for duck eggs. They’re still a little difficult to find. It doesn’t seem to affect the flavour. Once done, plate up your hash, place the egg on top et voila!

It’s usually around this time that I am sweating profusely from running around the kitchen trying to throw this all together. Even so, I continue to make this one because it’s so good. Very much recommend. 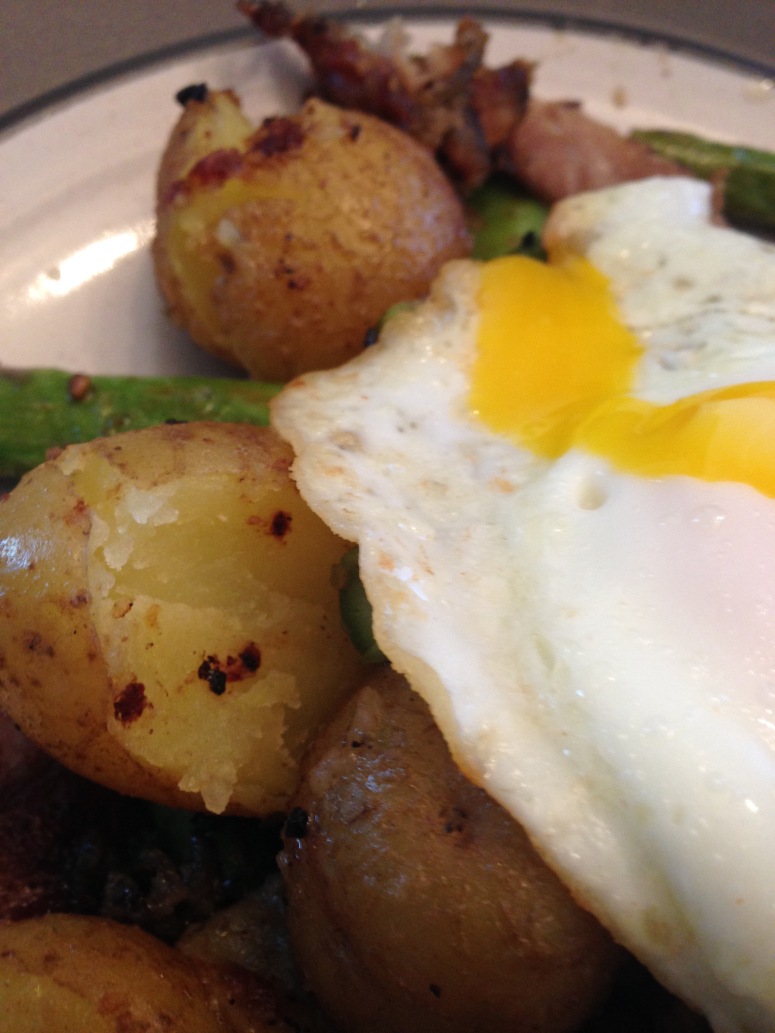