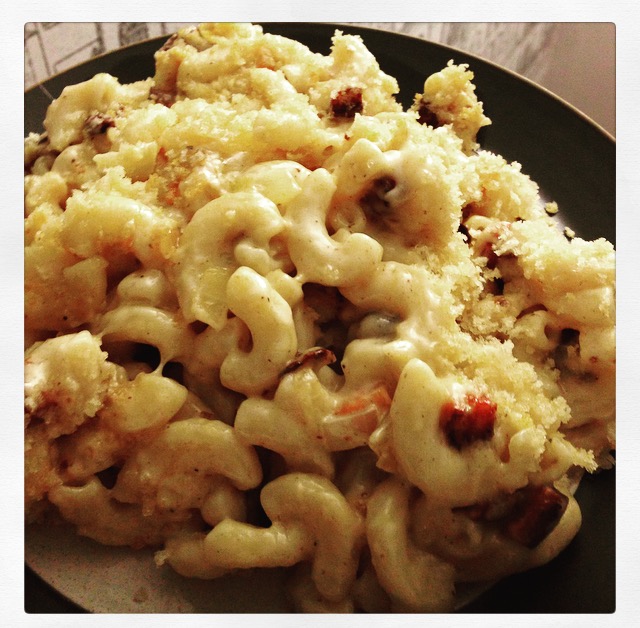 I’ve been on a cheese kick. Apologies if cheese isn’t your thing, but I can’t be stopped. I was inspired by our Cheesemaking class last week and the butter chicken mac & cheese that was served there to find a good recipe for homemade mac & cheese. I’m not a mac & cheese snob. I will happily eat a box with powdered cheese if the motivation levels are low. No, I will not have ketchup on it and don’t even think about throwing in hot dogs. It’s not happening.

This recipe came from Bon Appetit online and can be found here. When I first glanced at the recipe it looked like it had way too many steps and ingredients, but it wasn’t so bad in practice. Apparently, the cheese sauce and breadcrumbs can be prepared in advance, but all told it probably took me an hour from start of prep to consuming this meal.

I started by grating the cheese for a partially completed mise en place. I’m not really sure how long the parmesan cheese had been in my fridge, but it was a real pain to try and grate it. Note to self: buy fresh parmesan.

Anyway, so in a medium-large deep skillet melt the butter, add the pancetta and saute until crisp. Then, add the onion. After a couple of minutes, add the crushed red pepper, garlic and more butter. Add the flour. I didn’t want to use all of my milk last night, so I used whipping cream instead, but reduced the quantity to 2 cups.  Remove the skillet from the heat and whisk in the cheeses until it becomes a thick, creamy sauce (that can be poured on to your pasta)! Season with salt and pepper, though I would suggest to go lighter on the salt and maybe even bypass it all together considering the saltiness of the pancetta. Allegedly, this can be made the day before and chilled. I made it about 15 minutes before it made its way on to the cooked pasta.

Then, the pasta! In a pot of salted water, cook the pasta al dente. In the meantime, and in a smaller skillet, melt 4 tbsp of butter and add the panko breadcrumbs. Try to coat as many of the breadcrumbs as you can. I omitted the parsley because Kyle doesn’t like it. This too can be made the day before, if the recipe is to be believed!

Grease a medium sized (and fairly deep) ovenproof dish. When the pasta is done, drain it and put back in the pot. Mix in the cheese sauce. Pour the pasta into the ovenproof dish and sprinkle the panko crumbs over the pasta. Bake at 350F for 25-30minutes…really until the panko is a nice golden brown.

This one went over really well. Next time, I won’t replace the milk with cream, because it was really rich. It was good the next day, lost a little of the panko crunch, but otherwise good. It’s probably like a zillion calories, but the taste factor was there. There was a ton left over too.