I actually found this recipe last year on Facebook. I ended up making these cookies because we had one of those huge Costco sized bags of Mini Eggs and I didn’t want to look at them anymore and needed to get rid of them!! I’ve made them multiple times in the last year and even bought a stash of mini eggs at bulk barn after Easter last year to tide me over.

I decided to post the recipe here, even though they don’t really go with the whole cookbook experimentation theme, but I made them yesterday and I love them so I figured I’d share. They’re so good!! Especially when they’re fresh out of the oven, but even days later.

I had written down the recipe last year after seeing the Facebook post, but found a copy online HERE.

I started by smashing the Mini Eggs. I only used about a cup and a half of Mini Eggs. That’s more than enough. That’s the most time consuming part of this recipe.  After that, I set aside the dry ingredients (flour, baking soda, salt) in a medium sized bowl, I then combined the butter, vanilla extract, and both sugars in my mixer until the mixture was light and fluffy. Then, I added the eggs, one at a time, and then beat in the dry ingredients. I removed the bowl from the mixer and manually mixed in the Mini Eggs. 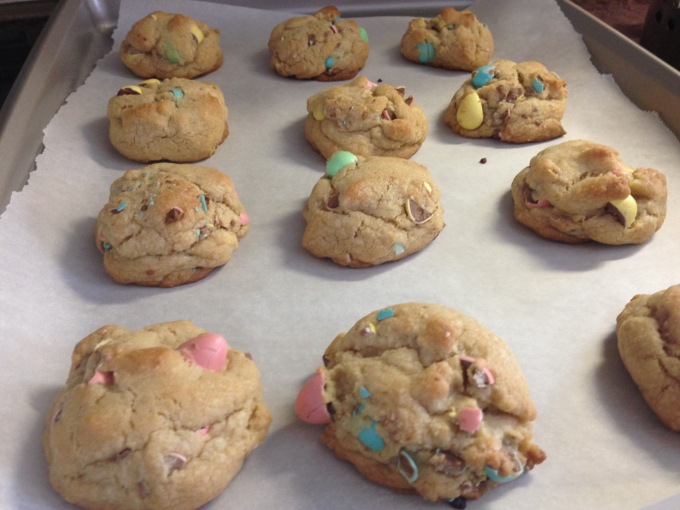