I like meals that fit into one bowl. That’s probably because I eat standing up so frequently and it’s much easier to hold a bowl than a big plate. There’s a perfectly good table here, but I eat and wander around the house. This dish fits perfectly into a bowl and is easy to eat while wandering, if that’s your thing too.

The recipe comes from the same Nigel Slater book as the Apple ginger endive fiasco but is SO much better. A copy of the recipe can be found HERE. If you’re looking for a hearty, filling and easy meal, I suggest giving this one a try with a few tweaks.

The recipe calls for raw beets to be peeled, then cut into smaller chunks and fried with garlic, carrots and rosemary leaves. I only had matchstick carrots kicking around the fridge, so I had to use them instead. It all smelled very nice frying in the pan and had really nice colour. Then, once the beets become slightly less crisp (like a rock), add the sausages which have each been cut into three smaller pieces. I used a mild Italian sausage that I’d found at the supermarket. When the sausages are done and the veggies tender, add 2tbsp of red wine vinegar and season with salt and pepper.

The online version of the recipe also calls for adding the leaves from the beets when everything was nearing done. The book version of this recipe did not include that ingredient, so I did not either.

Overall – it was delicious. Really filling with a beautiful colour. A very nice meal for a fall or winter day.

However, I would suggest using pre-cooked beets in this recipe. Yes, the raw beets become a little more tender when fried, but they take a while to do so and I think they’re so much nicer when they’re less crisp. 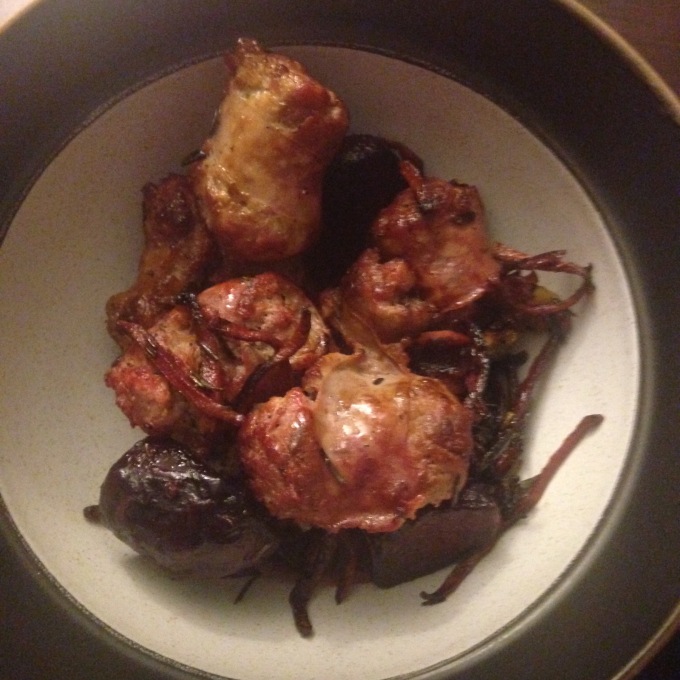